Back to all posts

Welcome to my first blog post!  My name is Ashley Riley and I'm a singer songwriter from Illinois.  I love writing. performing and telling stories so I thought I'd try my hand at a blog as well.  This post has nothing to do with music... it's about scars.  I had surgery last year to remove part of my thyroid so I've become a bit of a thyroid advocate when need be.  One of the scariest thoughts of undergoing a thyroidectomy surgery for me was the potential of changes to your voice or at worst losing your voice.  I'm happy to say all is well in the vocal department but I wasn't as lucky in the scar recovery department... so, let me paint you a picture....

About a year ago today I was checking out the incision on my neck for the first time. My neck was swollen, my body was sore and my face all splotchy. I was standing in front of my sisters bathroom mirror taking off a fancy necktie looking bandage. The night before we were laughing and watching The Good Place on tv (love that show) and my sister showed me a picture of a friend of hers that had a scar from a similar surgery - a thyroidectomy. You could barley even see it, a gentle little reminder of a hurdle crossed or something like that… I drifted off to sleep imagining a tiny incision that would fade away into nothingness.

I can’t remember if I gasped or burst into tears when I first undid my bandage and saw a huge slice across my neck. I was surprised, upset, a little pissed, but it also felt like it figured with all the things I went through leading up to the surgery, but that’s another story..  Don’t get me wrong, I was extremely relieved and grateful to have had a successful surgery that removed one side of my thyroid along with a tennis ball sized mass that had grown onto it, and that everything turned out cancer free. Praise the Lord, hallelujah, Amen, for REAL!!!  I instantly felt shallow and vain for being upset at the incision but to be honest as grateful as I was I was also horrified. Looking back I don’t know why a 4 inch incision shocked me so much considering they had to fit a tennis ball sized nodule that my surgeon called “very impressive” through it.  It actually seems a bit funny to me now, but at the time it was not funny and I was not graceful in seeing it.

So here we are and I’m writing my first blog about scars because I read a bunch of blogs about scars looking for help and really just found ads for creams and potions.  As you can see in the photos below, my scar is large, some may say impressive (wink) and it didn’t heal and fade away as planned. I’m cool with it because I know there are much worse things in life but I do still try new creams and treatments to help it heal because hey, why not?  If something can help, I will try it! More on that in bit but in the meantime I’ve come to think that maybe my scar is still visible because I’m supposed to talk about it and … at least it looks like a smile right?!

Below (all the way at the bottom) are some photos of my scar journey from the necktie bandage and right after seeing my scar for the first time, some of the drugstore remedies I’ve tried including my “Nelly strips”, and right after having my scar injected with steroids to what it looks like now. I swear it has a personality of it’s own, (I call her Susan).  Some days I wake up and it’s all smooth looking and the color seems to be fading and then the next day it’s all bright red and sassy!  Like seriously, no rhyme or reason.. I think Susan likes attention and when she feels she is starting to be ignored she thinks of things to do… Just kidding. I, like Susan, am a bit dramatic.

Right after surgery my scar was covered with glue and stitched on the inside.  I was instructed to wash / rinse lightly so the glue would stay on for 10 days and then to let it come off on its own.  When the glue came off I left it alone for a few days before trying anything and then… I went for it.

In the past year I have tried Hydrocortisone, Vitamin E oil, Aquaphor, Desitin, Mederma, doing nothing at all, Hemp Oil, Silicone in cream versions and rollerballs, Scarguard liquid, Vitamin C cream and Silicone Scar Strips aka “Nelly strips”. (because of the singer Nelly and his little face bandage he wore) I figured if he could rock it for no reason, I could rock it for good reason.

So that sounds like a lot, and it really was and it also wasn’t cheap! I can honestly say that what worked the best for me before going back to the surgeon were the Scar Away Silicone Scar strips.  They were about $40 a box but since I had to get the long ones I could cut them into 4’s and get a little more bang for my buck out of them.  You wash and re-wear them for (they say) 2 weeks, but I think 1 week is more realistic if you don’t want them to curl up on the ends and to stay looking clean. One tip for wearing them that took me a little while to figure out was to put them on clean dry skin and wear them for at least 24 hours.  I found it best to let it come off on it’s own or gently remove it in the shower.  They stick really well so peeling them off only aggravated Susan all the more.

After doing all that for a year I decided to go back to the surgeon to see if there was anything he could do to help me because while it didn’t hurt or cause me any problems I really didn’t like anything touching it - clothes, jewelry and even makeup. I came to terms with the scar pretty quickly but I still felt awkward when I would meet someone new or if I caught someone looking at me like, “What the hell happened to you lady?”  I don’t mind sharing my story but it felt like I was wearing it. Anyway, short of cutting the scar out and starting over knowing that I would potentially scar like such a badass the answer was steroid injections into the scar.

Hypertrophic / keloid scars are still active, which was explained to me as your body overdoing it and healing excessively so the tissue keeps building up more and more. I guess it would eventually stop on it’s own… my surgeon said at one point in time it was probably a helpful thing or maybe even a superpower if you will, to be able to heal that way.  (I am just sayin - superpower) These days… not so much. Anyway, injecting a steroid into it cuts off the blood supply and oxygen to the scar which softens it and makes it lay down flat but it does get more red in the meantime as you can see from my second to last picture.  I’ve had mine injected 2 times with 8 weeks in between the first and second time.  I’ll go back again for a follow up and see if I would need another round of injections or not.  After the injections if the redness were to not go away and was bothersome my surgeon said they can laser specific skin tones away these days!  I think if I had it to do over again I would start with the Scar Strips as soon as possible after surgery.  I waited until about 3-4 months before starting for no particular reason than maybe just not knowing about them yet.  I hope this was helpful / informative in some way. I’ll write another blog in the future about thyroid issues and symptoms that surprised me so if that interests you check back! 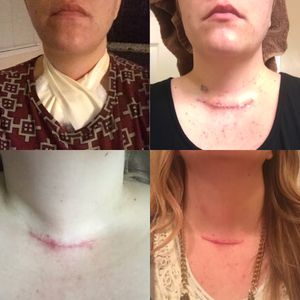 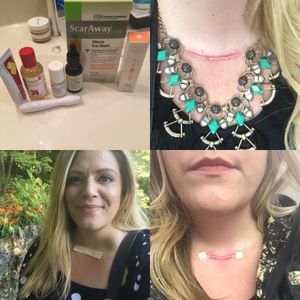 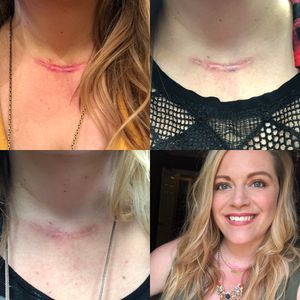 Top L- Susan is pissed, she hates needles - (it gets uglier before it gets better sometimes) Top R- Sides are flattening, this was right after 2nd injection so it's a little irritated Bottom L- about 4 weeks after second injections, why didn't I do this sooner?! Bottom R- Selfie!